So, like a lot of other people, I was pretty jealous of everyone at Glastonbury this year. I would love to go, but I’m just not sure that I could cope with the smelly/dirty side of things – I like to have a shower and sort my hair out and generally look kind of okay when I look back at photos – I know this is a ridiculous reason to be putting it off, but I just don’t know if it would get to the second day and I’d want to be home in my bed lol! I suppose it’s something that you don’t know until you’ve done it!

Anyway, the point of this blog… Kanye West! Kanye Omari West is an American rapper, who was born on 8th June 1977. He is famous for his contributions to music and fashion. He originally lived in a middle-class home in Chicago, but moved to New York City when he was a young teenager. He grew up in the Hip Hop scene and began to produce music. Did he know he went to Art School, but dropped out to focus on his music? He released his first album, ‘The College Dropout‘ in 2004 followed by ‘Late Registration‘ (2005), ‘Graduation‘ (2007) and ‘My Beautiful Dark Twisted Fantasy‘ (2010). He, more recently released his sixth album, ‘Yeezus‘ (2013), which has probably become one of the most talked about albums ever.

Kanye West is now one of the best-selling artists of all time, having sold 21 million albums! He has won 21 grammy awards and has been named one the 100 most influential people in the world in 2005, 2011 and 2015. Three of his albums have made it to Rolling Stone’s 500 Albums of all time and he has become one of the most controversial, out-spoken artists. Ever. So, why shouldn’t he be at Glastonbury? I don’t get it. 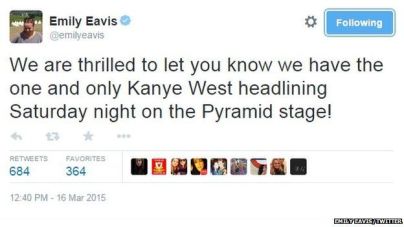 After a lot of speculation, I was really excited to see that Kanye West was headlining the Pyramid Stage this year! I actually cannot believe the amount of people that didn’t want him there because it ‘wasn’t the right kind of music’ or whatever. But the truth is, that music is just music. Is there a right or wrong headliner at Glastonbury? I thought the whole point of it and how successful it is was that people celebrated people’s differences and opinions… No?

When I was at secondary school, I loved Kanye West’s songs. I loved ‘through the wire’ and ‘gold digger‘ and ‘stronger‘, (just as a little side note, ‘Gold digger‘ will always be a good song as it was a ‘when my sister was in Australia song, along with ‘I predict a riot‘ and ‘Sugar Pie Honey Bunch‘. Ha!) and I thought he was really good. As you all know, I have a slight obsession with Jay Z too, so I couldn’t wait to listen to both of them on the ‘Watch the Throne’. So, I did always like him. I think he then got really angry with his music and just had a fixed idea that he hated everyone and everything that he didn’t like/understand. After watching him at Glastonbury, I have decided that I couldn’t have been more wrong. Yes, some of his music sounds really angry and he shouts a lot, but after I listened to the lyrics, it kind of makes sense. He is making a point that what I thought of him is exactly his point. It is so twisted around that it kind of makes sense. 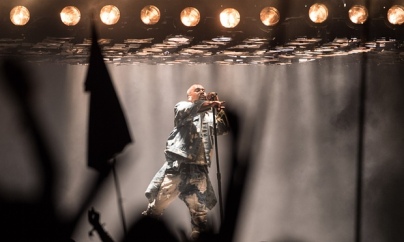 I thought he was so, so good! And he was so professional… After a stupid Lee Nelson ran onto his stage and pretended to dance or rap or whatever he was doing, he stopped the music and told everyone to “start over”. There’s very few people that would do that and not just carry on. My favourite songs that he performed were ‘New slaves‘, ‘Blood on the leaves‘, ‘Heartless‘, ‘Can’t tell me nothing‘ and ‘All falls down‘. I honestly don’t know what there was to not like about his performance – yes, he swears and shouts and maybe says things that are a little bit too out-spoken at times, but if you listen to his lyrics, he really is just trying to make a point and get the reaction that everyone gives him! Oh the irony! Just watch the videos (below), and you’ll see how amazing he is! The ‘VT’ before the performance on the second on, basically sums it up!

Peace and love, Polly May xx